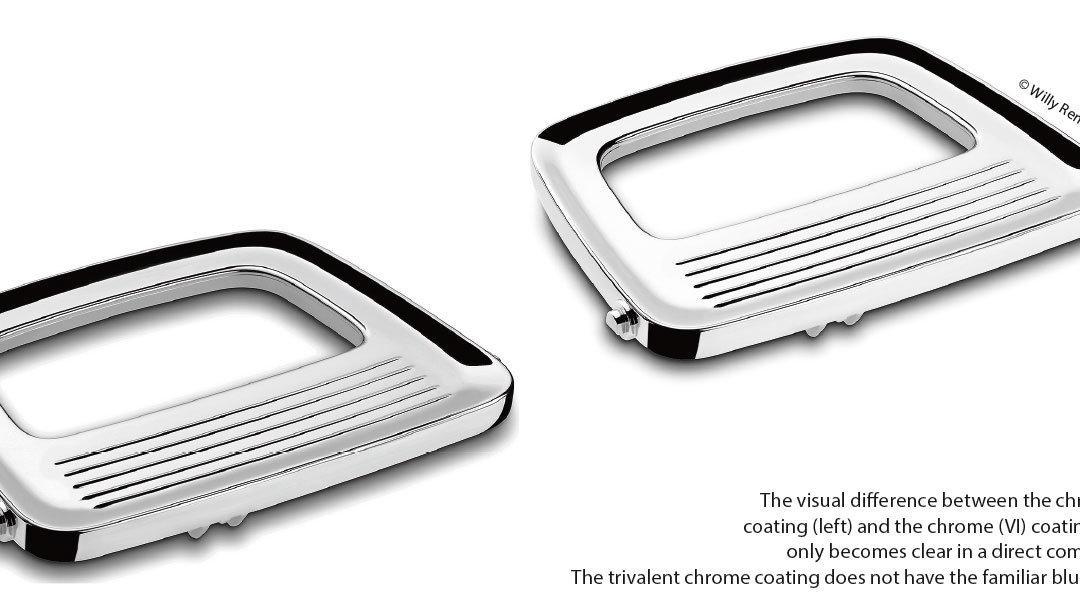 Decorative chrome coatings using trivalent chrome are a valuable alternative to hexavalent chrome compounds in terms of both appearance and corrosion protection, as this current example from industry shows.

The German electroplating company Willy Remscheid produces around 30 million die cast zinc components and one million aluminium parts every year. A total of 98 percent of these parts are given a chrome coating. In the light of the imminent banon chrome (VI) and the growing demand for chrome (III) finishes, the company decided in 2018 to add trivalent chrome coatings to its range of services.
A project plan with a schedule was drawn up which included the key tasks such as inviting tenders, ordering, application, approval and providing samples. The aimwas to take the project from the planning phase through to volume production in nine months. Despite a significant delay during the approval process, Willy Remscheid was able to complete the project on schedule.
During the selection of the chemical supplier, the company focused on four criteria:

1. The supplier’s experience with chrome (III)
2. Acquiring the approval of major customers for the products
3. The availability of staff and delivery times
4. The costs

The chrome (III) electrolyte has a much greater scattering power in the case of high-gloss coatings thinner than 0.5 μm. The deposition speed is between 0.05 and 0.08 μm/min and the chrome content is between 6 and 12.5 g/l, depending on the deposition speed and scattering power required. In a chrome (VI) process, the chrome content ranges from 250 to 400 g/l. Other benefits of the trivalent chrome electrolyte include good metal distribution, soft complexing agents, no harmful aerosols or partially fluorinated surfactants and simpler waste water treatment.
In order to achieve high levels of corrosion resistance, trivalent chrome coatings need to be passivated. This takes the form of an electrolytic passivation process that is carried out in the machine after electroplatingand involves creating a layer only a few nanometres thick on the surface. The passivation process changes the electrochemical potential of the chrome coating and seals the surface. As a result, the coating meets the high standards required by the automotive industry. The trivalent chrome process is more expensive and Willy Remscheid estimates that this leads to a price increase of between 8 and 14 percent, depending on the type of component.
Training courses for coating with a trivalent chrome electrolyte were held in cooperation with the supplier on the company’s premises and at the supplier’s site.

The visual difference between the chrome (III) coating (left) and the chrome (VI) coating (right) only becomes clear in a direct comparison.
The trivalent chrome coating does not have the familiar blueish tint.

Table 1 > Some of the parameters of the trivalent chrome process. 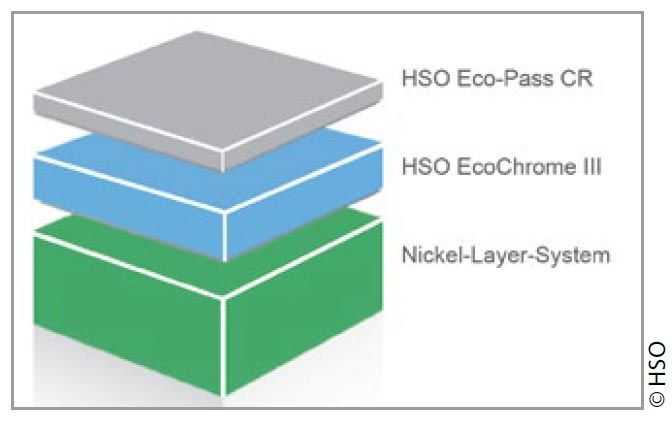 Table 2 > Requirements met by the
trivalent chrome coating after passivation.

When Willy Remscheid presented the trivalent chrome coated components to some of its customers, most of them were surprised by the quality of the finish. Hardly any of them noticed the slight change in appearance. The difference only becomes clear in a direct comparison between chrome (VI) and chrome (III) coatings. The trivalent chrome coating does not have the familiar blueish tint. //